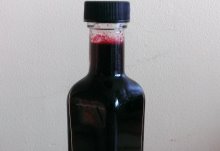 September 2013 - This is an attempt to make something similar to balsamic vinegar, from blackberries. 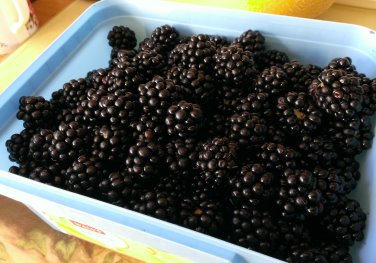 I started with a 2 litre box of freshly picked, beautiful wild blackberries - these were huge and very ripe and juicy. 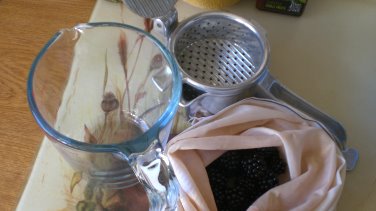 The plan was to extract the juice from them without cooking - because I primarily wanted juice without too much pulp.

I decided to attempt this using a mesh jelly straining bag and my little citrus press.

I could only process about a handful of blackberries at a time - so this was laborious. 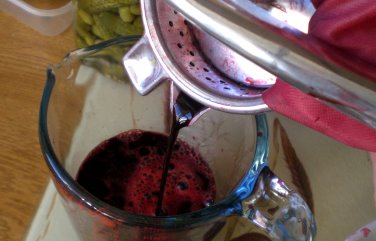 I was pleasantly surprised at the quantity of juice that came out, but a larger scale press would have been better for this.

- I'm going to try to get my hands on an apple press next year and extract some pure blackberry juice in bulk quantities - maybe as a blend with apples to make a blackberry-infused cider.

The pressed uncooked juice has an interesting apple-like aroma to it - of course, apples and blackberries are both members of the same botanical family, but I suspect the reason is simpler - the presence of malic acid in the fruit. 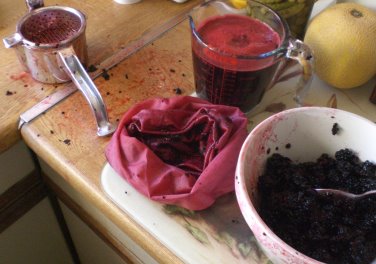 This was a horribly messy process - and I ruined the jelly bag in the process (it got caught on the edges of the plunger in the press).

I ended up with about a pint of pressed juice - probably about 50% of the volume of the fruit - which is not bad.

I set aside the pomace (the solid remnants of the pressing process) - see further below for more details.

The next thing to do was to reduce the juice by gently simmering it - this took about an hour over a low heat and the end result was a little over 100ml of dark, thick syrupy liquid - just under one fifth of the original amount.

Interestingly (although not at all relevant), about halfway through the simmering process (not as clear in the middle image above as it was in real life), the little clusters of bubbles forming on the surface of the reducing juice looked themselves just like blackberries.

Obviously a coincidence - but I find myself wondering if there's a word for this kind of phenomenon... 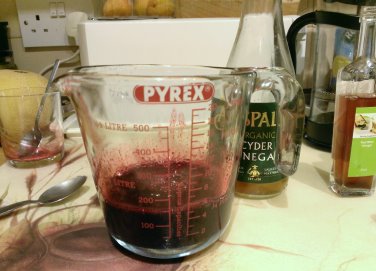 I needed to blend the blackberry syrup with vinegar, but had to experiment a little with the quantity and type.

I found cider vinegar to be more compatible than wine vinegar, and the ratio I finally settled on was one part vinegar to two parts syrup - this seemed the best compromise in terms of flavour and balance of acidity.

The result was a little over 150ml of dark, very tangy, fruity blackberry balsamic vinegar - just enough to fill a little sauce bottle (pictured at the top of the page). A small amount left over went into a jug for immediate use. 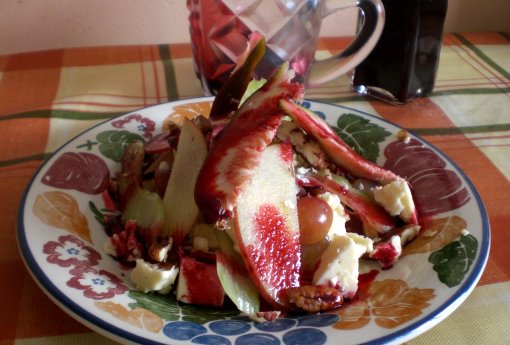 I made a small salad of thin slices of apple and celery, halved sweet grapes and chunks of crumbly Cheshire cheese, garnished with slivers of pecan and a few thin wedges of fresh ripe fig.

I dressed this with a few teaspoons of my blackberry balsamic vinegar. This turned out to be a very good combination - the sharpness of the condiment works really well with these sorts of fruity, nutty elements. 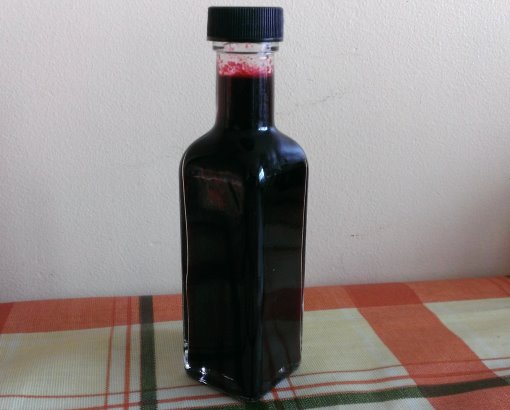 This was quite a bit of effort, but worthwhile - the result is considerably more fruity than ordinary balsamic vinegar and for this reason, I don't expect it will combine so well with some things - I tried it with tomato and although it was not unpleasant, it just didn't work as a combination, in my opinion.

Traditional balsamic vinegar is made by allowing reduced grape juice to mature and reduce further by evaporation in wooden barrels across the span of years or decades - very special, but hugely expensive.

So the commercial condiment known as balsamic vinegar ('of Modena') attempts to approximate the same flavour by blending wine vinegar with caramel and/or reduced grape juice.

So that's what I've attempted to do here - blend vinegar with syrupy reduced blackberry juice - my expectation was never to recreate balsamic vinegar exactly, but rather, to create something that can be used in similar ways.

It seemed to me that there would still be some flavour left in the remaining pulpy mass after pressing the fruit - and I was right. 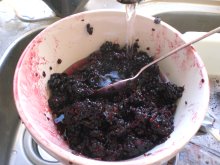 Inspired by a similar process used when pressing apples - the pomace was sometimes mixed with water and pressed again to obtain a weaker extraction that could be fermented to make something called 'ciderkin' - I added water to the blackberry pomace, gave it a good mix, then strained off the liquid.

The result was one and half litres of deep red liquid that had a great fruity aroma - it only needed a little sugar and the juice of a lemon to make it into a refreshing jug of 'juice drink' for the dinner table - and this was declared delicious by the whole family.

looks good. Reminds me of something I tried with elderberries a while back. Have you ever tried making Pontac(k) sauce. It's a sort of elderberry vinegar/ketchup that is apparently best after storing for 7 years. Mines about 4 years old now and very go

I did something sort of similar this summer. I made a balsamic vinegar reductionhttp://www.cookthink.com/reference/2889/How_to_reduce_balsamic_vinegarbut added about the same volume of fresh blackberry juice. When it was thick enough I bottled it in tw

Wonderful, as always! Do you think you could you use a passata machine or a mouli instead of the citrus press? Mike, after reading Tom's comment reading up on Pontack sauce, I'm expecting that to be your next article? Please! :)

I do have a mouli, but the objective here was to get clear juice without too much pulp, as that just ends up as sediment in the bottlesPontack Sauce is definitely on the agenda.;

This is awesome, but I wish to make an actual wine from reduced blackberry juice and then ultimately turn said wine to vinegar. Ever heard of that... possible?