There are dozens of different species of oak. Some produce acorns that are only edible to humans after processing to remove the bitter tannins, however, they're not all like that - so I set out to try eating some.

The tree I was in search of is the Holm Oak or Holly Oak - Quercus ilex -an evergreen tree originating from the Mediterranean region, but widely planted and naturalised here in the UK, particularly in coastal areas, as the evergreen leaves are tolerant of salt spray and coastal winds. 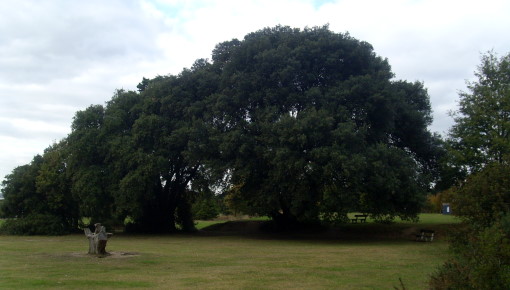 I found a great many Holm Oaks of all sizes at Royal Victoria Country Park - near Netley and overlooking Southampton Water. 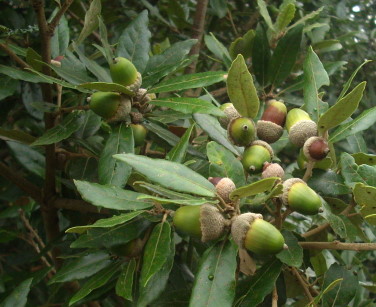 The tree is pyramidal and shrubby when young, growing into a large, handsome spreading tree with dark green leaves, similar to bay leaves in appearance.

The acorns are small, slim and pointed - up to about 2cm long and 1cm wide - borne in greyish-green cups that may be close-fitting and rounded, or fluted and wavy. 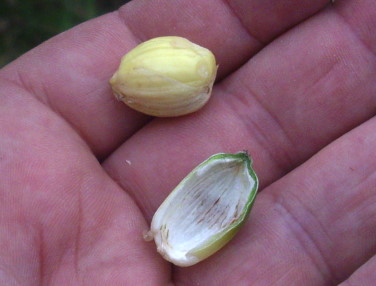 I picked one and peeled it - in many ways, they are similar to sweet chestnuts, although smaller.

I tasted a few raw - some of them were sweet and nutty, others a little bitter - seeming to vary from one tree to the next and seemingly more bitter on the sunny sides of the trees. 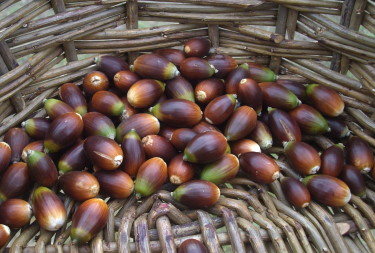 I gathered a few off the ground and found them without exception to be free of bitterness. This makes sense - as the fallen ones should be fully ripe.

Or maybe I was just lucky - I recommend a trial nibble of a representative acorn from each picking location, before gathering in earnest - to avoid disappointment later.

I gathered up a few handfuls and took them back home for experimentation. 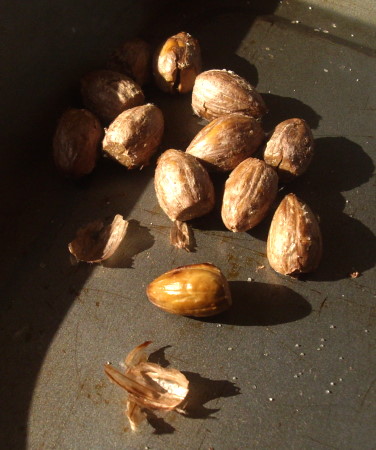 The ripe brown acorns were harder to peel than the green ones I had picked and peeled at the park - the easiest way seems to be to slice off a bit of the base, then slip the point of a small sharp knife under the skin and split it.

I rinsed the peeled kernels and rubbed them with salt, then roasted them on a metal tray for 10 minutes at 180 C.

When they were done, the thin inner skins had turned papery and were easy to just rub off.

It is worth noting that the inner pith layer (which turns into the above mentioned papery skin during roasting) is not particularly bitter or astringent, so it can be eaten along with the kernels, or left on if they are to be processed for baking or inclusion in some other recipe.

They're crunchy and mild-tasting - again, very reminiscent of sweet chestnuts, although probably not quite so tasty. There's nothing not to like, but nothing much to write home about either.

Probably the biggest drawback is that where they are a lot lower in fat than other nuts, they tend to dry out during roasting, ending up a bit too hard and crunchy - and lacking the oil content, they are a bit short on flavour.

I'd eat them if I needed to - and they're an interesting nibble eaten raw whilst out and about, but not much can be sung in praise of their flavour.

But that's not the end of this experiment - It's possible to grind them up to make a sort of meal from which cakes can be made - take a look here for details.

What Makes An Acorn Inedible?

Some acorns are edible, others not so much - the key difference is the tannin content.

Tannins are bitter chemicals that the plant produces to deter animals from eating it, and to help preserve the nuts through winter. The acorns of the English Oak are high in tannins and are mouth-puckeringly bitter.

Even bitter acorns can be eaten if they prepared properly - historically, this has been done by burying them in mud or ash for a long time, or pounding them to a pulp and rinsing/leaching out the bitter tannins.

The red oaks take 18 months to produce their acorns, which typically germinate in spring after overwintering in the ground - as opposed to the white oaks, which produce their acorns from flower to fruit in a single growing season, with the acorns germinating soon after falling.

Where I live, in California, the acorns are very bitter and inedible without special treatment. It's interesting that British acorns should be different;