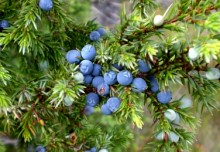 In the last few days of this year (2010), I decided to make use of some Juniper berries that I picked whilst on holiday in Scotland back in the summer.

Juniperus communis. A prickly, wiry little coniferous tree or shrub that grows on exposed heaths and hilltops and in open woods in highland regions. 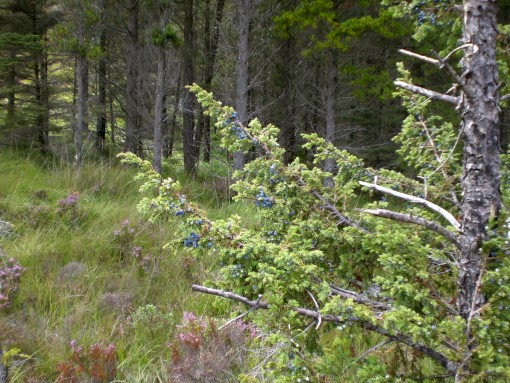 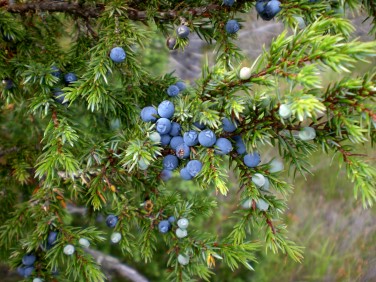 It's one of only three conifer species truly native to the British Isles, the other two being Yew and Scots Pine. 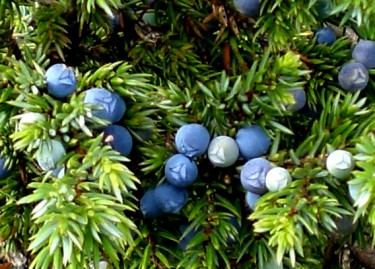 The plant is probably most easily recognised by the fruits, which are not true berries by botanical definition, but are fleshy seed cones. I'm not a botanist, so I think I'll carry on calling them berries.

They're about 4 to 10mm in diameter, hard and green while they develop, ripening after about 18 months to dark purple or black, with a waxy bloom that makes them look blue.

This extended ripening period means it is usually possible to find at least some ripe berries at any time of the year, especially as the plant may be found in a number of different local microclimates, such as sheltered hollows and against south-facing rocky outcrops 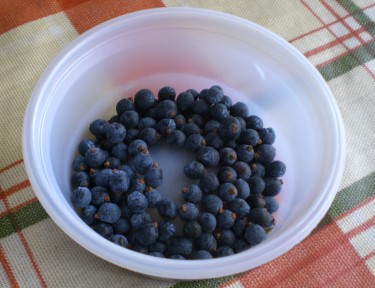 I picked about a handful of berries - they have an aroma that is a blend of resinous, herbal and citrus notes.

They're very easy to preserve - just left alone in a thin layer in an open container like this, they dry out in a week or so, shrivelling a little, but retaining most of their flavour.

Once dried, they can be stored in an airtight jar practically indefinitely. 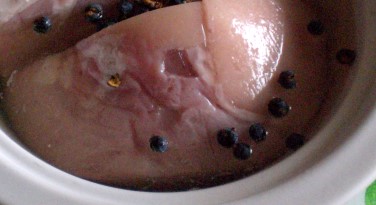 The most famous use of juniper berries is in providing the main flavour component of Gin. I don't run a distillery though, and the gin I buy comes already juniper-flavoured, so I'll be using my juniper berries for cooking.

Here, I've used about a dozen of them, crushed, for slow-cooking a piece of post-Christmas gammon - along with water and some leftover Cava.

That might seem like a lot of juniper, but these wild berries are quite small. If I was using the large ones from the shops, I'd probably only put in three or four of them. 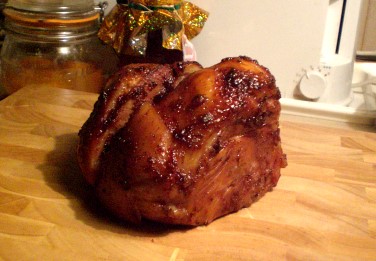 After five hours in the slow cooker, I glazed the meat with a mixture of cranberry sauce (another leftover from the Christmas table) and wholegrain mustard.

After half an hour in a moderate oven, the glaze caramelised and reduced to a sweet, sticky and delicious coating. This started out as a very ordinary and cheap bit of gammon, but with a little care and attention, it ends up as something quite special. The juniper aroma is present as a sort of warm, foresty spiciness, which balances the salt meat and sweet glaze quite delightfully.

Let's face it - this is one of those activities where the fingers are going to suffer - just like picking blackberries or gorse flowers,

It's too fiddly to be done with gloves on, and the plants are too prickly, and the berries too closely-borne on the stems to be able to pick any quantity of them in a reasonable time without getting pricked and barbed in the fingertips.

I view this as just something to be embraced. The joy of finding and eating wild foods sometimes comes packaged with a little effort or pain. I'm not a masochist, so I don't enjoy the pain itself, but I do feel that by contrast, it intensifies the pleasure and enjoyment of the wild harvest.

I could just have bought some juniper berries in a shop (and there's nothing wrong with that), but would they have been so special? I doubt it. These were not only suffused with flavour, but also with special memories of my time spent picking them in the Highlands of Scotland.

This article is one of a series on wild foodstuffs foraged on holiday in the Wester Ross area of the Scottish Highlands in 2010 - click the 'Highland' tag in the side column to see the others...