Our holiday in the Highlands of Scotland in August 2010 was very productive time for foraging - one of the most plentiful wild food resources was raspberries.

Rubus idaeus - common in woodland, hedges and riverbanks, especially in mountainous and moorland regions, this plant is a close enough relative of the blackberry and dewberry to be able to crossbreed with them - in cultivation, these unions gave rise to the Loganberry, Tayberry and many other hybrids. Crossbreed plants can occasionally be found in the wild, but are uncommon because the habitats and flowering seasons of the different species only partly overlap.

Unlike blackberries, the fruits are highly delicate when picked - because the red, juicy drupelets detach from the fruit core and come away on their own - for this reason, raspberries can't really be washed, transported or stored for long - but that's not a bad thing, because they are fantastic to eat fresh straight away. 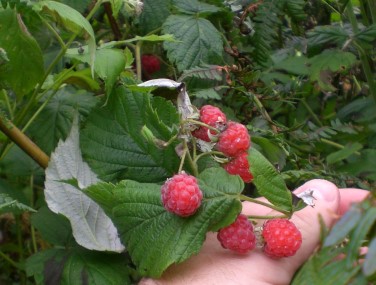 As is often the case, some of the best fruits are hidden under leaves, within the plant or are slighty out of reach.

However, the raspberry is not a thorny plant - the stems are sparsely clothed with stiff bristles - so it doesn't hurt to wade in to reach the best pickings. 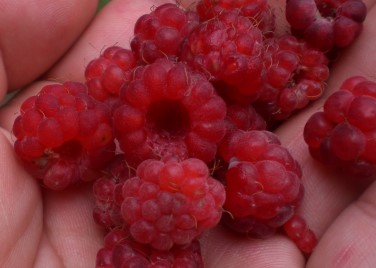 These are probably the best raspberries I've ever picked in the wild - fat, juicy and in great condition.

Eaten straight from the hand, they feel ever so slightly downy when they first hit the tongue, but they are so soft and juicy that the delicate fragrant flavour soon bursts through. 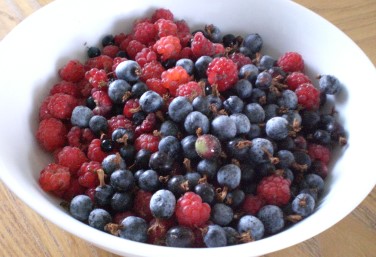 I picked a mixture of raspberries, bilberries (locally known as blaeberries) and blackcurrants.

Ideally, I'd have picked the different types of fruit into separate containers, but I only had one with me on the walk, so I had to pick out the blackcurrants from the mixture on returning back to the holiday cottage, so I could cook them with sugar. 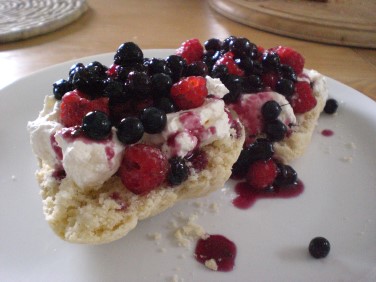 I made some scones (recipe here).

I served the raspberries and bilberries fresh and raw on whipped double cream on the scone, with the warm blackcurrant compote spooned over the top.

In case it isn't immediately obvious... this was remarkably good to eat.

Glad you enjoyed your raspberry foraging. Tayside is famous for its berries and even has its very own berry - the Tayberry, a cross between the loganberry and the black raspberrry developed at our very own SCRI (Scottish Crop Research Institute). Hence