The Amethyst Deceiver is a name that might conjure up images of a purple-clad comic-book villain. The truth is, it's a common edible mushroom.

The description here is not intended to be sufficient for conclusive identification of these wild fungi - the reader should understand that the possible outcomes of misadventure with wild-gathered fungi include serious illness and death.

IT IS YOUR OWN RESPONSIBILITY to take adequate steps in identifying any fungi you gather for the table - doubly so if you are intending to share them with someone else.

Informal descriptions, such as the one on this page, are not adequate for full identification - it's just good sense to fully and independently verify everything you read here.

Consult a comprehensive identification guide (I recommend Roger's Mushrooms (site no longer available - see here) and Wild Mushrooms Online) or best of all, talk to a living human expert mycologist.

What Are Amethyst Deceivers?

Laccaria amethystea - the name 'Deceiver' - applied to several different species in this genus - might make this sound like it's going to be a poisonous species, but it's not - it actually refers to the difficulty found in identification, due to the wide differences in appearance between specimens. 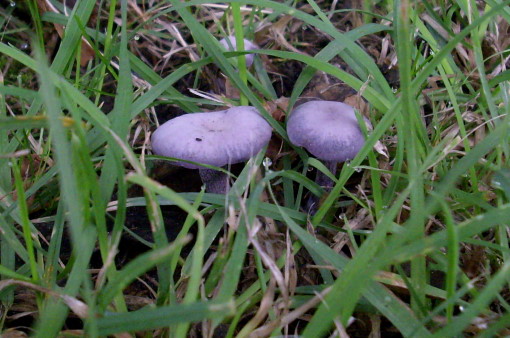 Fortunately with the Amethyst Deceiver, though, the task of identification is greatly simplified by the colour. Although still quite variable in form and overall appearance the cap, gill and stalk are all lilac-purple.

There are a couple of other purplish small fungi, including at least one that is poisonous, but they're quite easy to tell apart from this species using any decent field guide. (The usual warnings and disclaimers apply - see below) 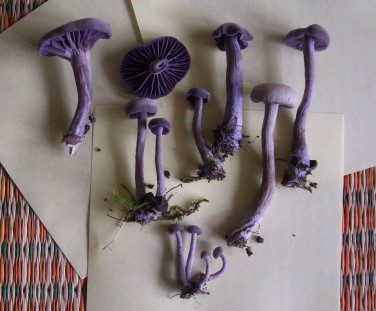 Despite the quite unusual and bright colour, this small fungus can be quite easy to overlook amongst the grass or leaf litter in which it grows - it's found in association with broad-leafed trees, especially oak.

Specimens vary widely in size and appearance - ranging from tiny little pinheads through to specimens 10cm tall with flattened caps about 5cm across. The colour of the cap may vary from deep lilac purple to pale lilac-grey and the cap may be convex, flattened or wavy at the edges. 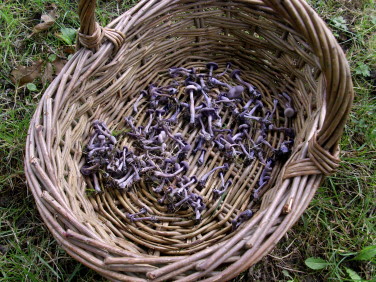 Wild mushrooms are best gathered in a flat, open container such as a basket or tray - a plastic bag will only really suffice for the briefest journey home, when no other option is available - more than half an hour and they start to 'sweat' and may no longer be usable.

When picking wild fungi, I usually try to cut off the base of the stems before placing them in the basket, to prevent any adhering earth or other debris from being shaken into the spaces between the gills.

However, on this occasion, the mushrooms were so numerous and tiny that it wasn't practical to field-clean them. This made for quite a bit of fiddly preparation time back at home.

The unusual appearance of these mushrooms raises some interesting possibilities - but in order to preserve the purple colour, it would be necessary to cook quite lightly, either in a little bit of clear oil or perhaps in a splash of white wine.

I didn't do that on this occasion and as a result, my deceivers took on a brown colour from the other mushrooms with which they were cooked. 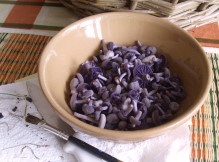 I trimmed up the stalks with a sharp knife and used a small paintbrush to remove any flecks of dirt or debris from between the gills. 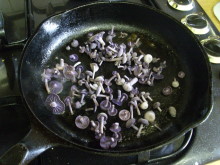 I fried the mushrooms in a little butter. 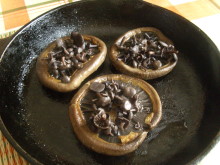 Then I served them inside bigger mushrooms (from the supermarket)

They have a pleasant woody taste that complements other mushrooms well. The texture is a little on the chewy side, although not unpleasantly so. Larger specimens would have been better, I think.

Not everything can be my absolute favourite - so these are not (except I do really love the colour) - but they're still a worthwhile wild mushroom, and super-easy to identify. I'll certainly pick them again.